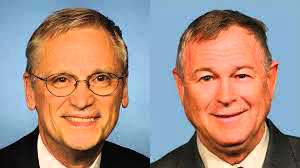 By Alex Pasquariello and Alicia Wallace, The Cannabist Staff

Protections for state medical marijuana programs known as the Rohrabacher-Blumenauer amendment were also continued in the legislation to fund the government, Rep. Earl Blumenauer, D-Ore., announced in a statement Thursday after the House passed the measure.

“While we are pleased that these critical protections will continue, two weeks is not enough certainty for the millions of Americans who rely on medical marijuana for treatment and the businesses who serve them,” Blumenauer said. “As Congress works out a long-term funding bill, it must also include these protections. And ultimately, Congress must act to put an end to the cycle of uncertainty and permanently protect state medical marijuana programs — and adult use — from federal interference.”

The extension of Rohrabacher-Blumenauer comes a week after a letter was made public in which 66 members of Congress urged Senate and House leaders to extend the medical marijuana protections that have been in place since December 2014. Those protections, previously known as Rohrabacher-Farr, prohibit the U.S. Department of Justice from using federal funds to prevent certain states “from implementing their own State laws that authorize the use, distribution, possession or cultivation of medical marijuana.”

The likelihood of the Rohrabacher-Blumenauer amendment’s inclusion in a new omnibus bill is “pretty good,” said John Hudak, a drug policy specialist and senior fellow at the Brookings Institution in Washington, D.C., in an interview with The Cannabist earlier this week.

“We’ve been down this road before,” he said.

Additionally, stripping Rohrabacher-Blumenauer could have negative implications for Republicans’ efforts in trying to round up the necessary votes on the new tax bill, he said.

“It puts Congress in a position right now that if they start meddling significantly with upcoming spending legislation, it could put at risk this very fragile coalition that’s been put together on the tax bill,” Hudak said. “They probably have a lot more to lose by stripping it than they do to gain.”

The short-term continuing resolution should give Congress a few extra weeks to negotiate a broader omnibus appropriations bill that could then last for nine or 10 months, he said.

“While we are happy for any extension, extending these protections for only a few weeks provides little comfort to the countless medical marijuana patients residing in the 29 states throughout the U.S., that have enacted legal medical marijuana programs.  These are law abiding citizens who have gone through the appropriate legal channels to acquire the right to consume medical marijuana to treat debilitating medical conditions. These protections should not only be extended through 2018, but they should be made part of our permanent legal fabric.”