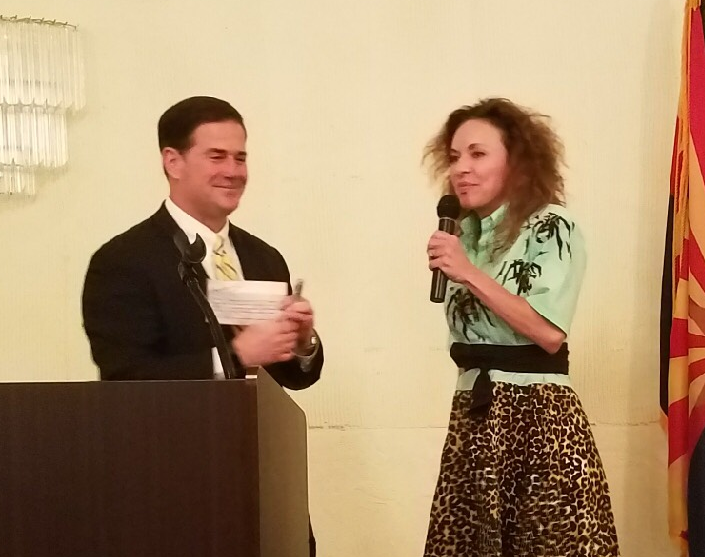 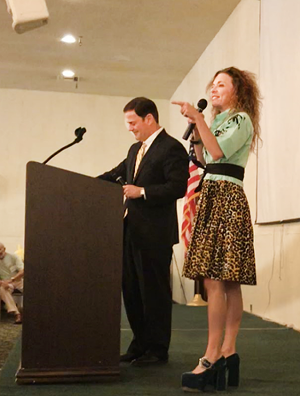 “Pinal County is a shining example of what can happen in a start-up state like Arizona,” Gov. Doug Ducey Friday told a large crowd at the monthly Pinal Partnership meeting.

Credit for economic growth goes to the small business owners, the job creators, he said, adding 160,000 new private jobs were created in Arizona since 2015. Since 2015, 200,000 people have moved to Arizona.

It’s important to remember the great recession and continue to be financially responsible, the governor said.

It’s not solely Arizona’s policies taking all the credit for jobs and growth, Ducey said. California Gov. Jerry Brown had been a partner, he joked. “You left California for a reason; let’s not bring those ideas here,” he messaged Californians.

He said he wants to make sure Arizona taxes are low, and regulations light because they are a hidden tax on entrepreneurs.

Ducey said the 676 regulations that have been eliminated in Arizona are equivalent to a $43M tax cut without affecting the general fund. “We want to protect public health and public safety, but when something is unnecessary, or not needed, let’s remove the obstacle.”

Arizona is in its 23rd year of drought, it uses less water today than it did in 1957 with both population growth and growth in Pinal County.

“It’s important that Arizona maintain its position as the nation’s leader in water management, particularly in the southwest region. There are reforms that will be needed and necessary in future legislative sessions,” Ducey said.

Ducey answered, it’s important the state speak with one voice on water and he encouraged interaction with the legislators and “not pitting rural counties against urban.”

He said he is working with the President, and Homeland Secretary Christian Nielsen and General John Kelly to help stop the flow of illegal drug activities, while at the same time, to “understand who the good guys are, and know that our number one trading partner is the nation of Mexico.” 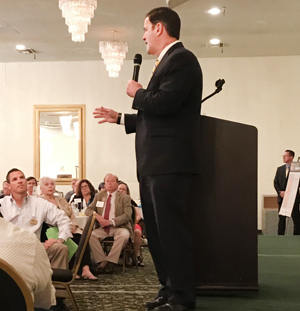 Another big win for the state is the Sky Bridge at Mesa Gateway Airport that will be the first inland cargo inspection facility in the nation, hosting both U.S. Customs and Mexico Customs. It will provide quick delivery of American products ordered online, exporting to Mexico and South America.

The governor said sports betting, which states can make legal if they choose, “is an opportunity and potential for a win for the tribal nations, a win for the citizens and Arizona and the general fund.”

In close, a poignant question from a father of a school-aged child touched on an essential issue of how to keep schools safe.

In response, Ducey spoke of going to students, parents, teachers, mental health professionals, law enforcement leaders and county prosecutors, asking if the schools are safe, and did people feel safe?

The result was something called the Arizona School Safety plan with five components. While all five did not pass, there are additional dollars for mental health counselors and improving background checks.

“If someone is saying this is what I’m going to do, it’s incumbent on us as leaders to act, and I ask you again talk to your legislators, so we can move forward with common sense legislation that respects law-abiding Arizonians Second Amendment rites and gives leaders that have information the ability to act,” Ducey said.