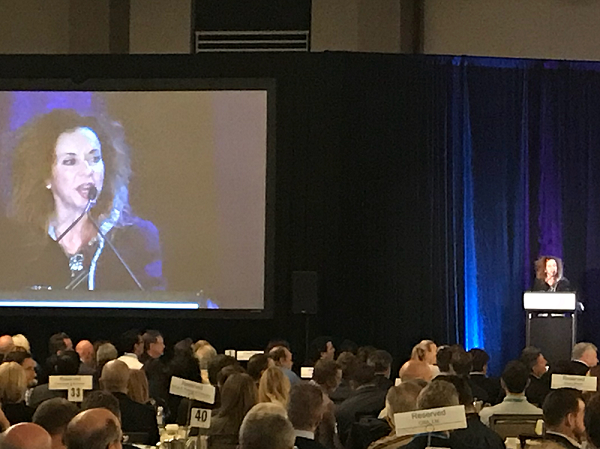 A panel of housing industry executives gave a positive outlook on the Phoenix housing market at the 9th Annual Belfiore Real Estate Consulting AZ Dealmakers event on Thursday before a crowd of 800-plus attendees.

Jordan Rose, Rose Law Group founder and president, moderated the panel and started off asking “What’s going on in the market today?”

Everyone playing in the market gets rewarded when it’s exploding. When it’s collapsing, everyone is penalized, even good operators. The healthy market allows Maracay to bring something special along with the opportunity to differentiate from competitors.

“In our industry, we look at job growth, population growth and consumer confidence. If you look at the Phoenix market, those things are looking great. There doesn’t seem to be anything on the horizon to give serious pause,” Warren said.

Roger Gannon, Woodside Homes division president, said that while demand is good, it’s not great. “We’re not having to fight to get people through the door. Being a veteran of the recession, I keep reflecting back on that.”

Sunbelt Holdings Chief Operating Officer, Sean Walters said there was sustainability in the market and “what’s interesting, capital has changed a lot from the mid-2000’s, from our perspective, where you used to have a lot of capital chasing and speculative land deals, that’s really gone for us. What we’re doing is partnering with landowners, getting them more of a retail price and working with builders.”

Rose then raised the question whether we’d see a housing market crash again in our lifetime.

“I don’t think we’ll see what we saw ten years ago. I think there is policy today that will change that, but I wouldn’t write off that when opportunities present themselves for the consumer to make money quickly and easily, they will. I think builders, developers and consumers will look for every opportunity. So, I think we need to be very disciplined,” Palmer said.

John Bradley, vice president Brookfield Residential, said he believes something will happen, not what came before, but probably something that we’re not focusing on today. “We said in 1988 through 1992; we’ll never do that again, then we did.”

“I see steady growth and checks and balances that are going to keep us from damaging ourselves,” David Everson, president of Mandalay Homes said.

Everyone is more cautious today Walters said, capital isn’t as availabl: Wwe’re being forced to be creative, limiting land supply to numbers that are sustainable for builder’s long-term. I don’t think you’re going to see a huge explosion of over growth due to time and development because the funds aren’t there to do that.”

Rose followed up by raising a question about the tax plan: Was it leading to higher consumer spending and how was it affecting builders.

“Politics aside what the tax plan has done is generally really good, certainly from a public company standpoint this puts a lot of money from us back to employees and shareholders,” from a consumer standpoint, I think it’s very positive,” Palmer said.

The question of geography was asked next by Rose, what areas in the Valley were the most prominent for builders.

For homebuyers, there has been high-quality job growth shifting to the east, downtown Phoenix, Tempe, the Price Road corridor and Chandler, Warren said.

“We’re starting to hear good news from phoenix mesa gateway area and north Scottsdale. There is good job growth in the west valley. It’s not necessarily high-wage growth so that may create a more affordable play on the west side with a premium play on the east side.”

Gannon said he likes what they see on the Westside, “not only are businesses piling in and investing, the highway development is supportive as well, which is a good place for demand to go, particularly the affordable demand.”

Norterra and the infill master-planned with USAA was mentioned by Walters along with growth in the entry-level plus or minus $250,000 FHA market, where builders are seeing sales of six to eight homes a month.

“There’s a lot of opportunities, there is a conundrum to want to grow affordable housing but get premium value,” Palmer said.

Rose asked the panelists about their niche as to what were they doing differently, starting first with Everson and Mandalay Homes net-zero homes that are designed to use less, lowering monthly costs.

Homebuyers are understanding and looking to pay more; it’s not free he said. “It’s an investment that’s paying off.”

Bradley said master planned communities before the downturn had more extensive amenities such as clubhouses that metrics don’t allow for today.  “In the community that we’re designing now, I think we’ve described it as being highly horizontally amenitized, so it has some special opportunities to do really nice stuff but will not be air-conditioned space.”

Maracay’s niche is a function of its land strategy. “We want to be good partners to our master-planned developers and sellers” Warren said.

Sunbelt Holdings partners with builders viewing them as clients and customers to “sell side-by-side to different segments of the market and all experience success, that’s niching from our standpoint,” Walters said.

What about labor constraints on the market? Rose asked.

It’s tough said Palmer. “The market is probably averaging six months, some product that’s maybe coming in a little quicker, there’s some down here that’s going out to twelve months, and I don’t think it’s going to get better overnight.”

She added  the industry is going through a cultural shift.

Following up, Rose asked, “When you say it’s a cultural shift, you’re talking more it’s not that we sent a lot of our labor back across the border it’s that our kids don’t want to do this?”

“It’s a combination. If you go to the peak of the cycle, we were building two million houses, and we had something like 997,000 workers on the ground nationally,” Palmer said.A million homes are being built now with 330,000 workers nationally. The lack of vocational programs in schools contributes to the issue of loss expertise and productivity.

Does Arizona have a more acute problem than other markets?

It’s global, but Phoenix is probably in the top five, answered Palmer.

There are a couple of cultural elements said Gannon. “The first is how we interact with our trade partners without giving away any detailed secrets, the one cultural shift we’ve had to make is having a concerted shift with working hand in hand with partners, so they can be as profitable as possible, because they can pick and choose where they want to go and who they want to work with. When we look back, there’s a ten-year gap in any new talent entering the home building industry, which is seen at all levels from trade, purchasing, superintendents and land. Kids coming out of college aren’t looking at the industry, so there needs to be an effort to get develop the path and the interest in housing.”.

In 2011 we were doing 7,000 housing starts in the Valley, said Warren, “We’re going to do over twenty-thousand here in 2017, in six years we tripped the capacity of the throughput, somehow some way the ingenuity of workers will respond to the challenge and I think it’s happening.”

Are there other constraints on the industry, such as trouble making deals?

We’re seeing demand from consumers Bradley said, “Good, not great, but as land buyers there seems to be a bit of a frenzy out there, so the land sellers might sense a bit of a frenzy, we have to navigate that disconnect frequently, driving terms and costs, it’s sometimes difficult to pull those deals together.”

It’s a crowded market here in with Phoenix, with national and regional builders in the market said Warren said. That’s a lot of competition from builders who may have outside pressures driving behavior such as Wall Street. Developers also may have pressure from investors that are looking at short-term decisions.

To close, Rose asked what the most troubling city design guideline that the panelists faced?

The most troubling is inconsistency in communication between the cities, creating a deficiency in the product, said Gannon. “When you come up with something great, you want to present it to other parts of the market, you often can’t due to inconsistency.”

Palmer said there’s a disconnect between a city’s expectation of what they think the city needs and what the consumer wants, and needs.

Warren said it’s an economic waste of going from city to city, using the example of getting a structural analysis done on a wall in Gilbert then doing it again in Goodyear. He said he doesn’t have a solution because they both have a responsibility to their constituents, but it is a waste of resources that the same things are repeatedly done.

Bradley said some cities “believe that they need to make design deadlines prescriptive, it may work for hundreds of lots in a subdivision, but for a large master-planned things change over a long period of time, and the notion that your design is going to follow something that someone in the city has prescribed is wrong-headed, so that would be my issue, trust us, we know how to do this.”

There’s a pragmatic approach to every build standard, Everson said. “From a custom home to a master-planned, sometimes we get caught up in the wrong category, and they get stuck on certain things in the general plan that don’t allow us to do business naturally.”