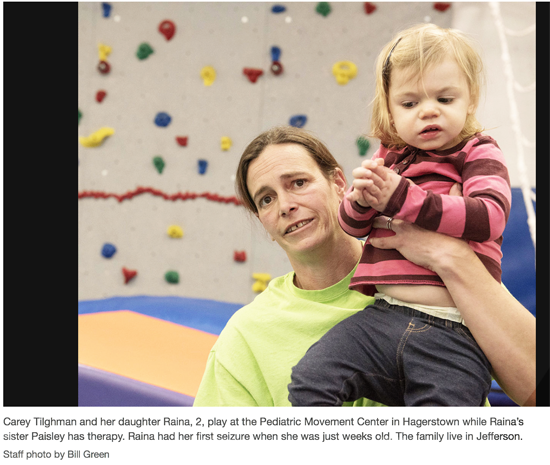 By Kate Masters | The Frederick News-Post

Raina Tilghman had her first seizure when she was just weeks old, on the day of her two-month check-up with the family pediatrician.

The night before, the little girl had been up for hours with the hiccups, said her mother, Carey, who lives with Raina, her husband, Matt, and their two other children at her parents’ home in Jefferson. Raina’s eyes were wide when she arrived at the doctor’s office, and the physician initially diagnosed her with a case of acid reflux. As Carey was loading the baby into her car seat and taking her out the door, Raina lost consciousness and was suddenly wracked with muscle spasms — a grand mal seizure.

“If Congress fails to renew the Rohrabacher-Farr Amendment for 2018, which protects state-legal medical marijuana programs from federal interference, these children will be among the victims affected. Patients across the U.S, children and adults alike, rely on medical marijuana to treat debilitating illnesses, or in many cases to combat the devastating effects of tradition medical treatments. This is a right to medical treatment issue not a cannabis issue.”