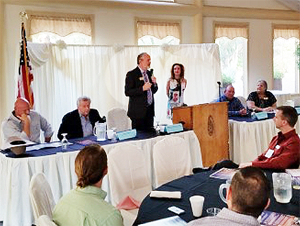 A large breakfast crowd gathered at a Pinal Partnership event in Gold Canyon Friday where Pinal County officials came together to talk transportation and the half-cent sales tax that will be on the ballot in November through propositions 416 and 417.

Jordan Rose, panel moderator and Rose Law Group founder and president, asked the crowd if it remembered why the partnership came together 12 years prior. “It was because we wanted to have a big coalition of various interests around the county and from other counties to come in and say Pinal County is happening, and they need transportation infrastructure,” she answered.

Rose asked panelists why they are in support of the propositions.

“We’ve come to the crossroads in Pinal County that the only way we are going to improve our transportation system is through a sales tax, Pinal County Supervisor Chairman, Stephen Miller said.”The feds aren’t going to be coming with any money. The state isn’t going to be bringing any money. If we want to plan our destiny, we’re going to have to do it ourselves, and I see this half-cent sales tax as the first step to moving Pinal County forward.”

“How did everyone get here this morning,” asked Pinal County Supervisor Todd House. Most of us drove here and wish there were other ways to get around the county he answered.

The tax would give transportation alternatives throughout the county and the potential development in the Superstition Vistas. The north-south corridor and the SR 24 would unlock the area.

Think about Maricopa County, without the passage of Proposition 300. There would have been no Loop 202 or Loop 303.

The Board of supervisors’ number one goal is economic development.

City of Maricopa Councilwoman Nancy Smith said one of the reasons she supports the tax is the widening of SR 347, which is main way out of the city and prone to delays and accidents.

County-wide economic development was another reason and the potential for more revenue, which could be used to reduce property taxes.

“I’m not a tax person, and it takes a lot to convince me to approve a tax, and I’ve definitely seen the writing on the wall,” Smith said.”The money isn’t coming from federal or the state. It has to come from us. We have to do this for ourselves and for the success of Pinal County.”

“Here in Pinal County, there are new people coming, the infrastructure needs help, were not getting help from the state or the federal government, we have to do it ourselves,” Pinal County GOP Chair Mike Burke said.

Improving the infrastructure will enhance the life of Pinal County residents, attract new businesses and enhance the value of existing businesses.

Burke said it also has the potential to enhance the value of property throughout the county with better infrastructure and less congestion. It can also be a great benefit to our law enforcement, fire and other first responders to get to a location in a shorter and more efficient way.

“We have a big challenge in front of us in law enforcement, how we continue to protect all of these communities that were responsible for,”Pinal County Sheriff Mark Lamb said. “San Tan Valley in and of itself is a tremendous task. If you think that it’s easy to get around this county of 5400 square miles, especially when someone has an emergency, come ride along with our deputies and you’ll see it is an extremely difficult thing, especially in places like San Tan Valley during the middle of the day.

“We have a lot of people that work and live in different areas of the county. We deal with motor vehicle accidents a lot, and it’s on the rise here in this county, and there’s no doubt that roadways will alleviate that and make it much safer to travel to and from work.

“For all of us to be able to profit and grow the way that we want to grow as a county, it’s imperative that we set up the right infrastructure ahead of time so that we can bring in those businesses, and the people that can work at these businesses.

“Law enforcement wise, we want to be able to respond to these calls for service in a safe and efficient manner. We’d love to reduce the travel time on our calls for service, and I think, ultimately, the half-cent taxes will pay itself out in spades and is absolutely something that will benefit us from a law enforcement standpoint,” Lamb said.

“One of the biggest questions that people want to know is if propositions 416 and 417 can be renewed after twenty years, or does it truly die,” Smith said.

The answer, based on a state statue, is no. The only way it can be renewed is through voter action.

Burke said, “In the beginning when I was first approached about this project, I had read information from critics, my position was yes, we need this infrastructure, yes the only way to do it is with a sales tax, because it will end up being paid for in part by people outside the county. Sales tax is much better than a property tax which is regressive in nature.”

He said he did have some reservations when he read about abuses of funds in the past by Pinal County officials.

“I realized that the abuses cited were a long time ago, some back to the nineties, and I imagine the people who did that were gone,” Burke said. Nevertheless, the possibility is still out there, the proponents of the tax came back to me and advised that there will be a citizens committee monitoring the expenses of the RTA (Regional Transportation Authority)  and ensure that the funds are used appropriately, and with that oversight, I signed on.”

As for how projects were chosen for the transportation plan, Miller said communities throughout the county completed transportation studies. The studies were taken and compiled into a comprehensive plan.

Smaller cities in eastern Pinal County, such as Mammoth and Superior will also benefit from passage of the propositions, receiving $300,000 per year for road and city improvements for twenty-years, House said.

Two years ago, the Maricopa City Council heard a transportation plan regarding the 347, which indicated in the year 2022, the roadway would receive a service level F, gridlocked.

“Who wants to live in a place where you have only one way in or out,” Smith asked.

“This is vitally important to everyone in Pinal County; it is not a political party issue,” House said.

“I think we’re looking at less than eighty dollars a year for the typical family of four, that’s a pretty small amount. I’m one of those no tax guys and I’ve already been challenged, Supervisor Miller what do you think. But again, just like my colleagues here, we have to take care of own destiny. Eighty dollars a year and better road ways for the next twenty years, I think is worth it.” Miller said.

Travelers through the county will also be paying into the tax, not just the residents.

Jakob Anderson, Vice Chairman of Pinal Partnership Board, who is involved in grant applications and works to bring businesses to the county said, “I think this tax opens up the ability to get that federal and state funding in some of the grant applications, because you’d have shovel-ready projects which puts you at the top of the list in that grant application process.

“President Trump has an infrastructure bill that may or may not get through in the next two or three years, well let’s just say it has a chance, the timing is perfect. If we go ahead and go forward with this transportation tax, when it gets passed in November, we will start getting rights of way, plans built up. It takes a long time to do the blueprint, to do the flood control, to get the road ready to go, but at the end of that three of four years, we will have several shovel ready projects and matching funds, which will put us at the top of the list,” House said.