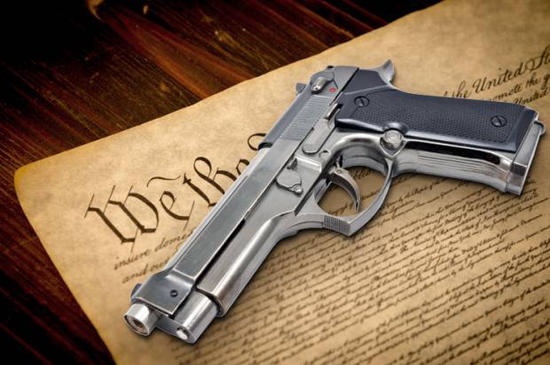 The United States Supreme Court has been guided primarily by a conservative majority for the past few decades (if not longer). Even the so-called “swing vote” justices that provide the deciding fifth vote in most cases – most recently Anthony Kennedy and Sandra Day O’Connor – voted with the staunchly conservative justices far more often than not.

But with this election, we stand to see a paradigm shift (or for our more action-oriented readers, a cataclysm of epic proportions) in our Supreme Court makeup. With the recent passing of Justice Scalia, a newly appointed and confirmed liberal Justice would give rise to the first majority-liberal Supreme Court in quite some time. While such a philosophical shift has very broad implications, many have asked how the new court may impact the court’s recent decisions that determined the 2nd Amendment recognizes an individual right to bear arms.

Also important, however, is that even these rulings issued by a conservative court recognized this individual right to bear arms is not unlimited and expressly left the door open for laws reasonably limiting (1) who may possess a firearm; (2) the areas where firearms may be possessed; (3) the types of firearms that may be possessed; and (4) concealed carry of firearms. The court also recognized the government can impose reasonable conditions on the sale of firearms. So needless to say, there is ample room for a number of gun control laws to be passed.

Ever since these rulings, the court has been incredibly reticent to wade back into the 2nd Amendment waters. Since 2010, the court has only suggested (though not decided) that an individual possesses a 2nd Amendment right to possess a stun gun for personal protection. It has also tacitly (though not definitively) approved of state bans on semi-automatic weapons. In other words, while the court has absolutely recognized an individual right to bear arms, there is still great uncertainty as to the breadth and type of gun control measures that can be adopted by the state and federal governments.

Chances are no matter which candidate is elected president, the newly composed court will not overturn the individual right to bear arms (and its application to the state government). This is thanks to a long-recognized and highly regarded doctrine called stare decisis (I promise, no more Latin terms after this). Stare decisis essentially stands for the proposition that once an issue has been litigated, it is binding on future courts. It would be incredibly unlikely and virtually unprecedented for any court, even a newly composed liberal-led court, to overturn such recent precedent establishing the individual right to bear arms. The chances of such an action are even more unlikely when considering the court’s disinclination to consider 2nd Amendment issues after 2010.

Thus, while the individual right to bear arms is almost certainly safe no matter who wins, the next court will have a huge role in deciding how broad or narrow post-2010 gun control measures can be. A shift towards a liberal court makes it far more likely broad gun control measures (such as a federal ban on semi-automatic weapons, wholesale bans on concealed carry permits and/or imposition of universal background checks applying to all transactions of firearms) would be deemed constitutional. Conversely, if another conservative judge is appointed, we can count on a far more skeptical review of any gun control measures (although it would appear even a conservative court would at least uphold state bans on semi-automatic weapons).

But it’s not fun to give such a simple answer. So let’s look at all the gloom and doom that could potentially result in a number of scenarios:

Possibility 1 – Confirmation of Merrick Garland: The Republican leadership seems dead-set on gambling Donald Trump will win the election (and then appoint a conservative justice) by refusing to confirm President Obama’s current nominee, Merrick Garland, who is thought to be a centrist (although a justice’s true colors are rarely known until they are actually confirmed to the court). Until the election (or President Obama’s withdrawal of Garland as a nominee), however, Congress could still opt to confirm Garland. Assuming Garland is a centrist and would be a “swing voter” similar to Justice Kennedy, he is likely to side with his liberal colleagues more often than not. Further, the few instances in his judicial history concerning 2nd Amendment issues suggests he will be generally inclined to support broader gun control laws, but is not dismissive of the individual right to bear arms. Thus, if appointed, we can assume he would vote with his liberal colleagues in approving broader gun control measures, but unlikely to join them in any potential effort to repeal 2nd Amendment protection of the individual right to bear arms.

Possibility 2 – A Clinton Victory: Hilary Clinton is known to have a fervent belief in and support of very broad gun control measures (and New York, for which she served as Senator for a number of years, continues to have some of the strictest gun control laws in the nation). If elected, we should expect to see her nominate a far more liberal-leaning jurist than Merrick and one that has strong views favoring the constitutionality of broader gun control laws. With one exception (discussed below), a Clinton-nominated justice is likely to be the most willing to overturn the individual right to bear arms and very inclined to approve of more-stringent gun control laws.

Possibility 3 – A Trump Victory: A Donald Trump election would not lead to as clear-cut a nominee on 2nd Amendment issues as it would initially seem. Little is known about Trump’s judicial philosophy (After all, how often do non-attorneys and politicians such as Trump opine on this subject?) Though Trump’s campaign recently released a list of potential candidates, these candidates represent a very broad spectrum of conservative ideology, making it difficult to pin down exactly where his preference lies. It is also difficult to rely on this list of judicial preferences since it was delivered on the campaign trail and certainly designed to appeal to the broadest segment of Republican voters. Additionally, while Trump has recently adopted an almost-militant support of a very broadly construed individual right to bear arms, his past statements suggest a far more ambivalent view towards the 2nd Amendment and skepticism towards the right to own semi-automatic weapons. Ultimately, Trump represents a complete wild card when it comes to judicial nominees, but a prudent guess would be he would nominate a justice who supports the individual right to bear arms, but will have not be wholly opposed to more-stringent gun control laws.

Possibility 4 – Third-party Victory: A third-party victory is more likely in this election than possibly any other election not involving Ross Perot. Thus, it is fair to consider the positions of the most credible third party candidates. If Libertarian candidate Gary Johnson were to win, he would undoubtedly appoint a conservative justice and has presented a very skeptical view on the efficacy of gun control laws (though he has never expressed militant opposition to such laws). If Johnson were to win, we would have a judicial nominee who is a staunch ally of the individual right to bear arms, but one who would not be openly hostile to all proposed gun control measures. His judicial nominee would likely share similar views. If Green Party candidate Jill Stein claims victory, both would likely seek to appoint a nominee that would be overwhelmingly in favor of adoption of broader gun control as well as a reversal of the 1st Amendment right to bear arms. Bernie Sanders has a relatively moderate view on gun control laws, though he does at least believe in a ban on semi-automatic weapons and universal background checks. It would be likely he would appoint someone whose views are similar to current nominee Garland Merrick.

Possibility 5 – Anti-Gun Control Doomsday Scenario – This doomsday scenario essentially requires a two-term presidency involving Clinton or Stein or back-to-back Democratic/liberal Presidents. As discussed above, it is highly unlikely a fifth liberal Justice alone would lead to a reversal of the individual right to bear arms. But conservative Justices Kennedy and Thomas are two of the four oldest and longest-serving Justices. Though neither has expressed any intent to retire during the next president’s term (and likely would be willing to hold out another four years if a Democratic president is elected), a second Democratic term would see Kennedy celebrate his 84th through 88th birthdays and Thomas celebrate his 72nd through 75th birthdays. Assuming both retire during a second Democratic presidential term and are replaced by two strongly liberal Justices, the court would have a 7-2 liberal super-majority (assuming no current liberal justices retires, passes away, or are not replaced with another equally-liberal justice). Although it is unlikely for a 5-4 court to overcome the doctrine of stare decisis and repeal the current case law, a super majority of 7-2 would be far more emboldened to do so (and would have the benefit of more time separating the repeal from the initial decision). Chances of this occurring would also increase if the newly appointed liberal justices are far-more left leaning than current nominee Garland. Additionally, such a court would almost surely act as a “rubber stamp” for any gun control laws that made its way before the Court.

Possibility 6 – Pro-Gun Control Doomsday Scenario – Alas, there is not as nearly as exciting a doomsday scenario here given the likelihood that either Trump or Johnson would nominate a justice with relatively moderate 2nd Amendment views. But unlike the above, this doomsday scenario could occur in one term. Let’s assume campaign-era Trump’s virulent 2nd Amendment views do in fact align with Trump’s judicial philosophy. He would appoint a justice to replace Scalia who would at least maintain the status quo. Justice Ginsberg is both the oldest (83), third longest-serving, and arguably the most liberal justice currently on the court. Unfortunately, she also has been in poor health in recent years. Assuming she retires due to health and/or age in the next four years, Trump could appoint a second virulently pro-2nd Amendment justice. With a 6-3 conservative court, we would likely see such a court require any gun control laws survive the strictest scrutiny to be deemed constitutional. This court would also be virtually “swing vote” proof as it would require two conservative justices to part ways (whereas until recently, only one conservative justice needed to join their liberal colleagues to change the outcome of the case).

The bottom line, however, is the vote for your legislators is likely more critical than the newly appointed justice will be. If the court maintains status quo (as it is most likely to do), we will have a court that recognizes and respects the individual right to bear arms, but is unwilling or unlikely to strike down many newly adopted gun control measures. Thus, it is far more likely your state and federal legislators, governors, and the president, will decide the future of gun laws in the near future than would the Supreme Court (which frankly, is as it should be).