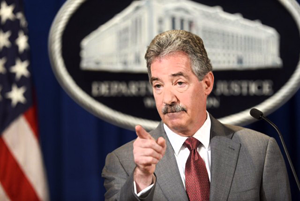 In a seismic shift, Attorney General Jeff Sessions will announce Thursday that he is rescinding a trio of memos from the Obama administration that adopted a policy of non-interference with marijuana-friendly state laws, according to a source with knowledge of the decision.

While many states have decriminalized or legalized marijuana use, the drug is still illegal under federal law, creating a conflict between federal and state law.

The main Justice Department memo addressing the issue, known as the “Cole memo” for then-Deputy Attorney General Jim Cole in 2013, set forth new priorities for federal prosecutors operating in states where the drug had been legalized for medical or other adult use. It represented a major shift from strict enforcement to a more hands-off approach, so long as they didn’t threaten other federal priorities, such as preventing the distribution of the drug to minors and cartels.

“While this blatant attack on the legal cannabis industry is concerning, it’s not surprising as the Attorney General has been vocal in his opposition to the legal cannabis industry for decades. However, as I have consistently informed clients, the Cole Memos provide “guidance” regarding the DOJ’s policies on the allocation of resources and enforcement; they are not law, nor rule or precedence. The revocation of the Cole Memos are concerning but to say that this action will cause the downfall of the industry is purely dramatic speculation.   Keep in mind there are 29 states, as well as Washington DC which have implemented some form of legal medical cannabis programs. To undermine or destroy the legal cannabis industry would require a Herculean effort and would also endanger another cornerstone of the Republican party, which is the importance of states’ rights.

The reality is unless cannabis is federally legal, there are no guarantees or safeguards, however, the most effective way to avoid the attention of the federal government is to continue to operate your business in complete compliance with the applicable state laws, rules and requirements and ensure you are current on all federal, state and local taxes.  It’s also important for business owners and supporters of the industry alike to continue to lobby their state and local politicians to support, acknowledge and protect those programs which have been implemented by the people, as well as a patient’s right to utilize cannabis to treat various debilitating medical conditions. To continue to attack legal cannabis programs is simply a waste of limited state and federal dollars, which could instead be allocated to far more serious issues such as healthcare, education and immigration. However, we will continue to closely watch the ongoing actions of Attorney General Jeff Sessions.”