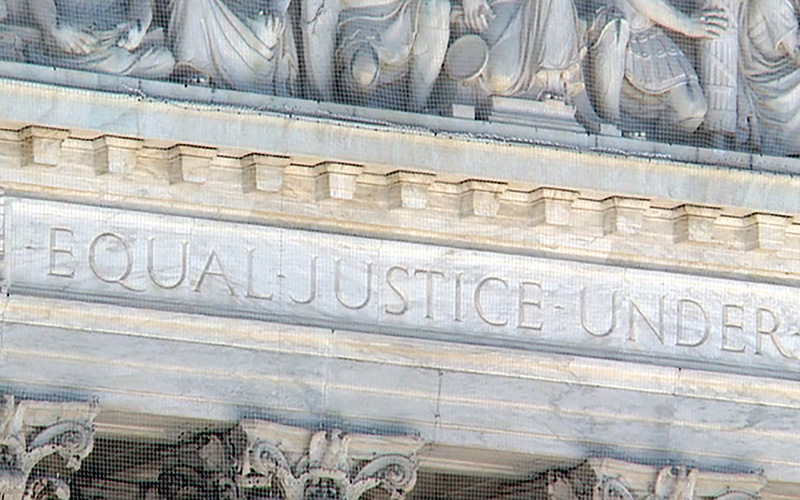 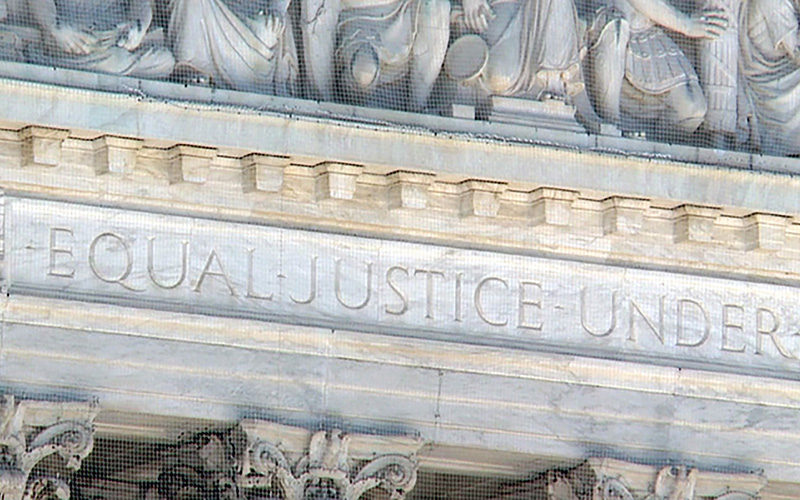 The legend “Equal Justice Under Law” is carved into the pediment above the main west entrance to the Supreme Court, which faces the U.S. Capitol.  Photo by Nathan O’Neal/Cronkite News

WASHINGTON – The Supreme Court has refused to hear an Arizona case that pitted a non-Indian mother and Indian father against one another in a fight for custody of their children.

The decision Monday lets stand lower court rulings that invoked the Indian Child Welfare Act, a 1978 federal law that aimed to keep the government from breaking up Native American families except under specific circumstances.

Attorneys for the children argued that the act has no place in a private custody dispute between parents that did not involve the government and should have been “easily resolved.” They said it creates a double standard for Indian children that will make it harder for custody cases to be decided in their best interest.

But one American Indian advocate said it is important to remember the history behind the law, which he said acts as “remediation for the many hundreds of years of mistreatment of Indian tribes.”

The petition by the children, members of the Colorado River Indian Tribes who were identified only by their initials, sought to overturn an Arizona Court of Appeals decision that prevented their Indian father from severing the parental rights of their non-Indian mother after years custody battles between the two.

The children argued that the ICWA does not apply to a private petition to sever parental rights but is only aimed at “abusive child-welfare practices carried out by nontribal public and private agencies.”

The custody case stemmed from a 2005 divorce between Stephanie H. and Garrett S. In February 2009, the mother moved the children without the court’s permission and without notice.

The father filed a petition in December 2012 to sever the mother’s parental rights. At trial in January 2016, the court ruled that Garrett S. had shown abandonment by the mother, but not neglect. But more importantly, the Court of Appeals said that he had not met the ICWA standard which requires proof of “active efforts” to prevent the breakup of a tribal family.

Adi Dynar, an attorney with the Goldwater Institute, which appealed the case to the Supreme Court, said applying the ICWA means courts have to balance the child’s rights against the rights of the parent whose rights could be severed – something no other child has to contend with.

“That in itself is a huge difference that raises equal protection concerns because ICWA applies only to Indian children and that determination is based on the race or national origin of the child,” Dynar said. “The situation in this case has nothing to do with the removal of children by nontribal public or private agencies.”

But Robert Clinton, a professor at the Sandra Day O’Connor College of Law at Arizona State University, said invoking ICWA in this case was “mandatory,” and he called the appeal just another attempt by the Goldwater Institute to declare the ICWA unconstitutional.

“The case falls within the coverage of the act and that’s exactly what the Goldwater Institute objects to … the act itself,” Clinton said Tuesday. “They’re trying to overturn an act of Congress that goes back 40 years … and has weathered every constitutional challenge that has been voiced against it.”

Clinton said Congress passed the act to prevent the separation of Indian families and dispel the “notion that somehow non-Indian parents are going to be better.”

John Dossett, general counsel for the National Congress of American Indians, echoed Clinton’s concerns and said it is important to remember the history behind the act, which he said makes up for years of mistreatment of American Indians. The Supreme Court’s rejection of this case shows that the court’s appetite for these cases, which “involve the lives of children,” has not changed.

“The Supreme Court has never addressed this constitutionality question squarely and tribes have a lot of good arguments,” Dossett said. “It’s been the law for a long, long time and it should stay that way.”

But Pacific Legal Foundation attorney Jeremy Talcott said that while the ICWA was reasonable when it passed, it is now too broad and its implementation creates a double standard in family court proceedings.

“Any other child of any other race that goes before a state court judge, generally, every state uses some sort of a formulation of the best interests of the child determination,” Talcott said. “For Indian children, that doesn’t determine the outcome of the case.”

He said the foundation, which supported the Goldwater Institute appeal, was “obviously disappointed” by the Supreme Court’s decision, but it hopes that, “when appropriate, the court will take another look at the Indian Child Welfare Act and fully review its constitutionality.”

Lawyers representing the Colorado River Indian Tribes declined to comment and the tribe itself did not respond to a request for comment.

My associate and I have previously commented on this case as it has worked its way up through the legal system. Our analysis has primarily focused on the legal aspects of this case, and admittedly, I have not spent much time thinking about the specific facts until now. When I read about this most recent development some of the facts jumped off the page for some reason. Basically, you have a group of American Indian children arguing that the Indian Child Welfare Act – an Act which was promulgated in 1978 to preserve the solidarity of American Indian families and therefore to theoretically protect them – does not apply in private severance actions.

The apparent reason for the children to make such an argument in this instance is because the application of the act has led to a result that is not in the best interest of the children involved in the case. I have previously noted my opinion that no legal principal should stand in the way of a judge entering orders that are necessary to protect the best interest of children. Interestingly, at least some segment of the American Indian population has taken the same position even though doing so may mean jeopardizing certain protections afforded to them under the Indian Child Welfare Act.

I anxiously await the Supreme Court to specifically and thoroughly address the direct interplay between the ICWA and the States’ respective best interest standards.